Last July, I was privileged to see the musical Oklahoma! at the Parkway Playhouse in Burnsville, NC. I haven't been to a play since high school, and this was my first musical. I had recently watched a DVD of a London performance starring Hugh Jackman, and let me tell you, that man can sing. But I digress... 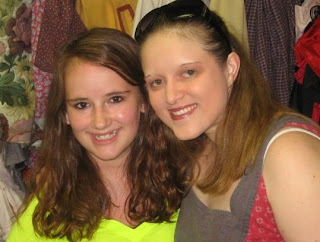 Myra McCoury (l) and Stephanie Poling (r)
Group member Stephanie Poling and Myra McCoury (daughter of group member Suzan McCoury) were in this version of Oklahoma! so I felt a bit of an obligation to be there. I was worried though, as money was a bit tight. Parkway Playhouse to the rescue. They offered free tickets to the final performance taking place on July 4th. How cool was that. I piled into the truck with fellow group members Chrissy McVay and Judith Smith and off we went. 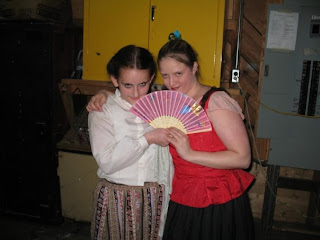 If you haven't seen a musical live, I highly recommend you do. And if you get a chance to see it on a smaller, local stage, all the better. What fun the actors seem to be having. It really makes you want to get up there with them. 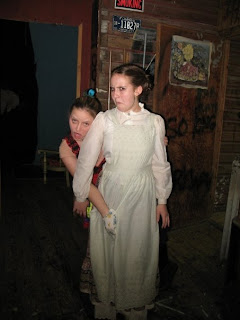 Everyone in this production did a wonderful job, and I look forward to attending many more productions in the future. They're doing Annie this summer, so who knows. Maybe I'll take in a show. 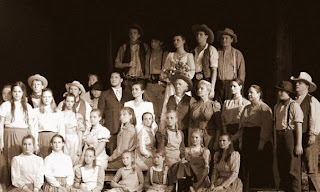 Posted by Mayland Writers' Group at 11:11 AM