I found Shirley's obituary online today, and decided to copy and paste it here, along with the picture they also had posted. 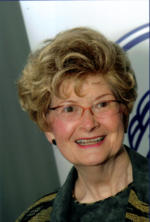 Shirley Styles Phillips, 75, of 389 Orchard Road, Bakersville, North Carolina passed away October 23, 2011 at home after a long illness. She was a native of Yancey County and the daughter of the late Theodore and Zona Harris Styles. She was preceded in death by a son, Robert Scott Phillips.

Survivors include her husband Bobby E. Phillips of the home, and her beloved daughter Janet Kenniasty of Columbia, Maryland as well as three sisters, Teddie Styles Hall of Statesville, North Carolina, Erma Styles of Lynchburg, Virginia, and Doris Styles Laughrun of Midlothian, Virginia.

She was valedictorian of her Burnsville High School class, a graduate of Mars Hill College, Meredith College and received a graduate degree from Rollins College, Winter Park, Florida. She spent 21 years as a teacher in the post secondary schools of Osceola County, Florida.

She and her husband, Bobby, were married in Burnsville June 9, 1956.

To remember Shirley, a gift to Hospice Of Mitchell County in Spruce Pine is suggested.

A memorial service will be held at First Baptist Church of Spruce Pine, North Carolina on Saturday, November 5 at 2 pm. Following the service, the family will receive friends in the fellowship hall until 4:30 pm.

Henline-Hughes Funeral Home of Bakersville is assisting the family with arrangements.